Whenever I study the Bible I begin to think of ways I can communicate to others the things I am learning. It wasn't always this way!

When we lived in Peru, I was happy to teach the women at church. Many of them had very low education levels and pretty much anything I taught them was new to them. Besides, they were patient with my Spanish. 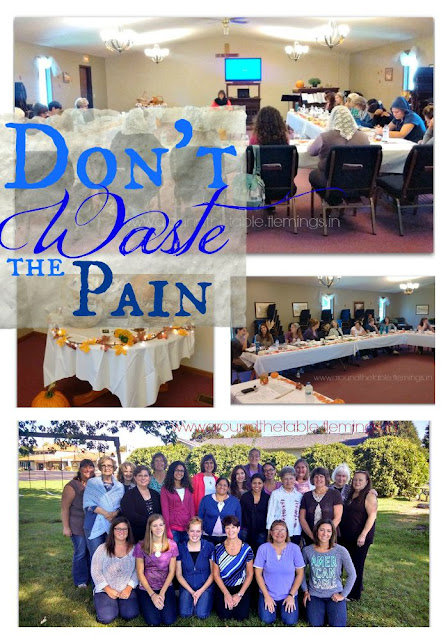 But then we moved to Bogota, Colombia and the women in the Ladies' Bible Study were all professionals. I was asked to teach there and I was terrified!

There were some Thursdays when my husband had to almost literally push me out the door. He would tell me he was praying for me and promise that our little ones would be fine with him. He couldn't understand, he was unfazed by preaching to any audience. 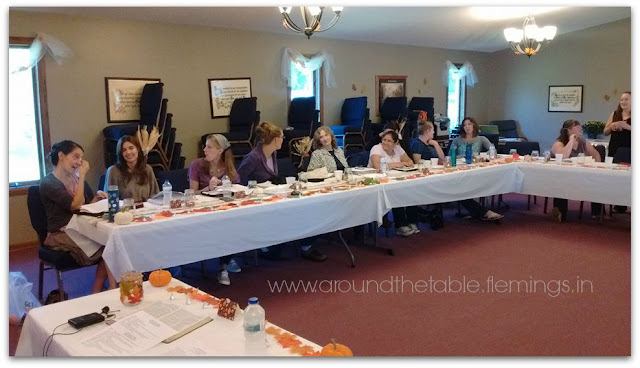 But as I taught each week and saw the women begin to grasp what the Bible has to say, I grew to love it. Pretty soon, I was always thinking of ways to explain and illustrate everything I was learning.

They started asking me to speak at ladies' conferences and retreats as well as the Bible class at our local church. I became a part of a committee of ladies that planned conferences for women in Bogota and was often one of the speakers at these conferences. One conference that we called "Passion, Purity, and Love" had over 600 women attending. 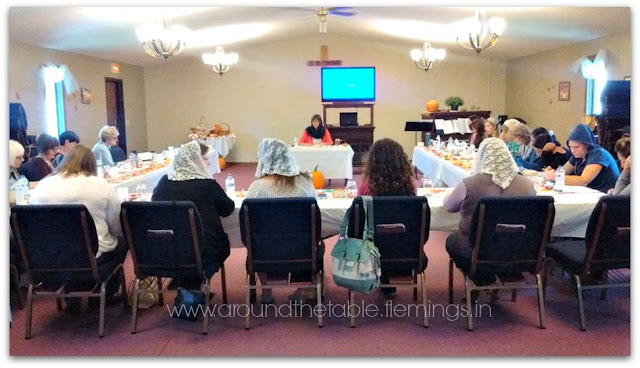 When we moved back to the states in 2008, my ministry changed radically. My husband basically continued his international ministry with the Emmaus Bible Courses, just from a different location. But I was ministry-less. I soon took on the Meals-on-Wheels program at our local church, served on one of the ladies' service teams, did lots of hospitality, and attended the women's Bible study, but I no longer was a sought after Bible teacher. 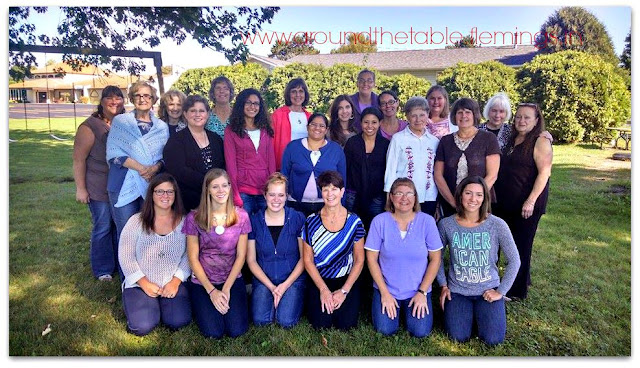 That's pretty much the way it has been these last seven years. I have had some opportunities to teach, but not on a regular basis. I've been on the Ladies' Planning Committee for three years and head of it for two. I also serve on the Missionary Awareness Committee and head up a ladies' service team. So I've been doing things, but not something that became a passion for me.

A few years ago my husband and I went through a very difficult experience. Actually, it's still on-going. As a result of this I started praying, "Lord, this hurts so much. Please don't let us waste the pain. Use it in our lives and through our lives." Then the Lord led me to do a study on the life of John the Baptist, a man who was no stranger to trials and pain. 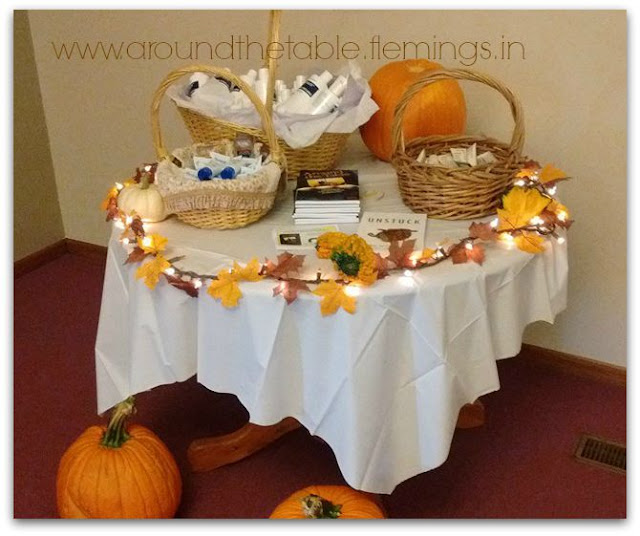 Recently I believe God began to answer that prayer. I was invited to speak on the topic of Suffering at a small local church in Minnesota. I had a great time with the women. We cried together and we laughed together. Several told me that my ministry was just what they needed to hear. I hate it that they are going through the difficulties they are facing, but I'm thankful that God isn't wasting our pain and is making it useful to others. Someday, they will see the same results.

Today in My House 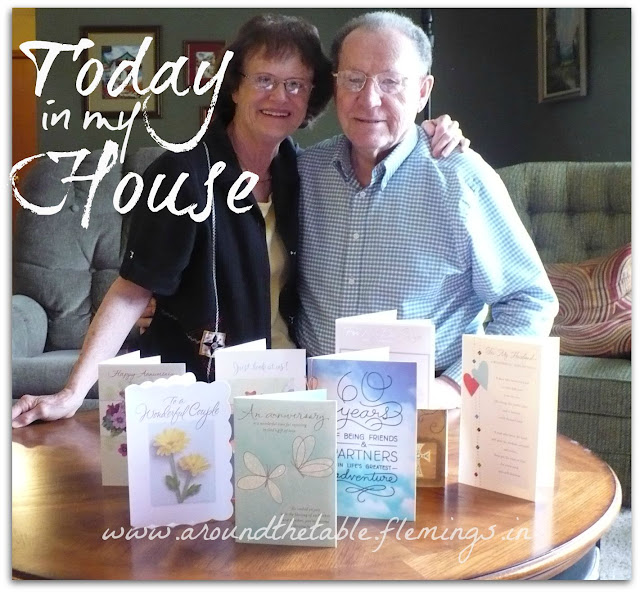 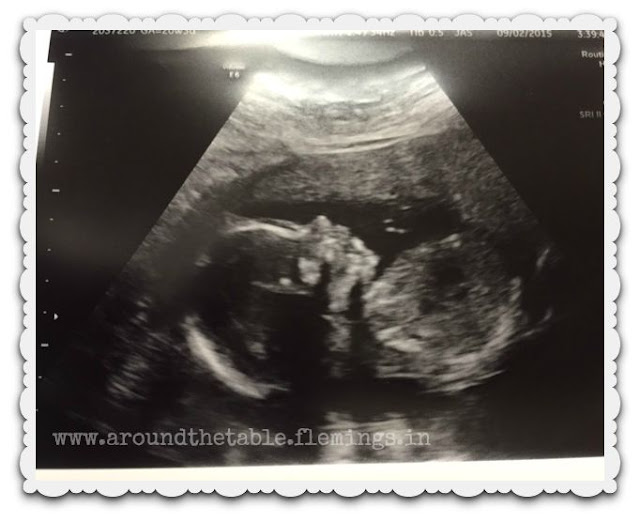 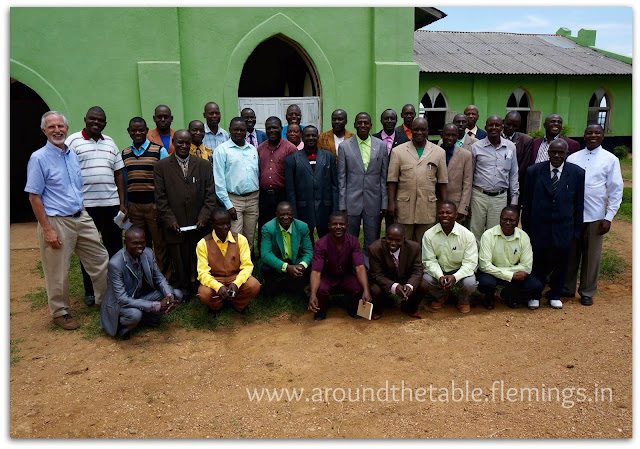 Most of the sixteen years we lived in Colombia, terrorists made it impossible (or at least very dangerous) to drive through much of the country. In the mid 2000s the government got tough with the terrorists and opened up large portions of the country again. Our family took advantage of the new safety and took road trips to visit areas of that beautiful land we hadn't seen, even after 14 years in the country. (Colombia: "The only risk is wanting to stay.") 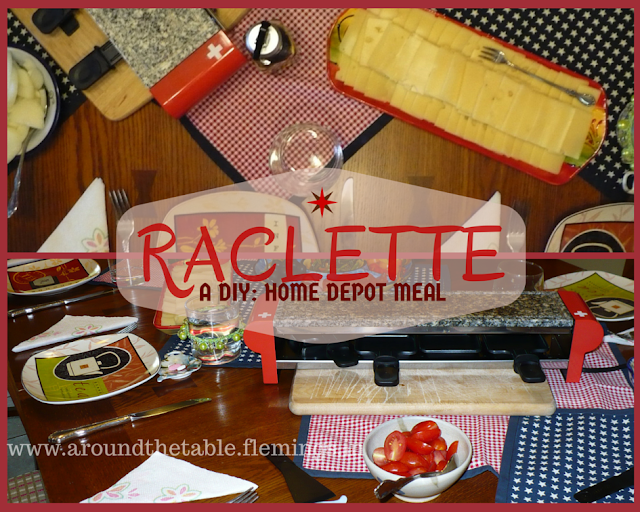 On one of those trips we visited some friends from Europe who live in another Colombian city. She is Austrian and he is German. They served us a meal they called "raclette." They had a little electric cooking machine they set right on the table. On top it was a sort of grill or griddle, underneath, a broiler. She had all kinds of foods set out--bits of meats, eggs, pickles, cheese, peppers, onions, on and on.

Fast forward about 10 years. I asked my new, German son-in-law what his favorite meal was, what he asked for on his birthday. He immediately said, "Raclette!"

I thought having a little electric raclette cooker would be great--something unique for guests to get involved with, something hands-on for a stay-in date night, a fun family meal, so I thought of asking my daughter and son-in-law for one for my birthday. But they beat me to it! They gave me one for Christmas. 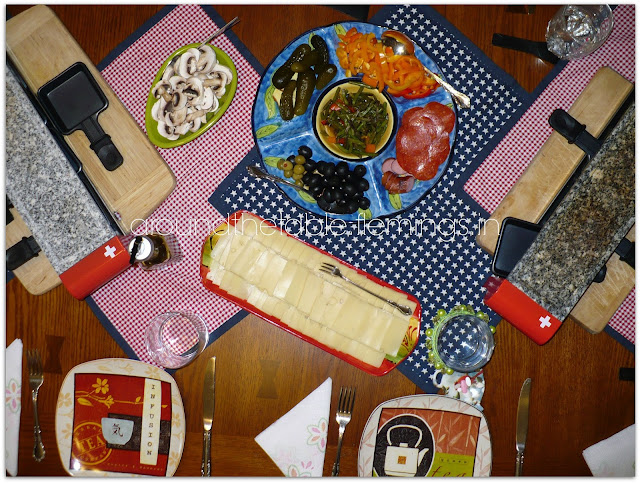 We've had lots of fun meals with the raclette since then. They gave them to our two sons and their wives, too, so when we want to have a group of more than four (that's how many little cooking pans ours has) we borrow our in-town son's--and usually invite them along for the meal!

When I first got it, I wrote to my Austrian friend to ask what you serve for people too cook for themselves. She basically said, "Anything you want!" But she gave me some ideas of things to have on the table for people to experiment with.

It's so easy and we cook at the table so the meal lasts longer and the ice is broken as we talk to each other about what combinations sound good and what others are trying. 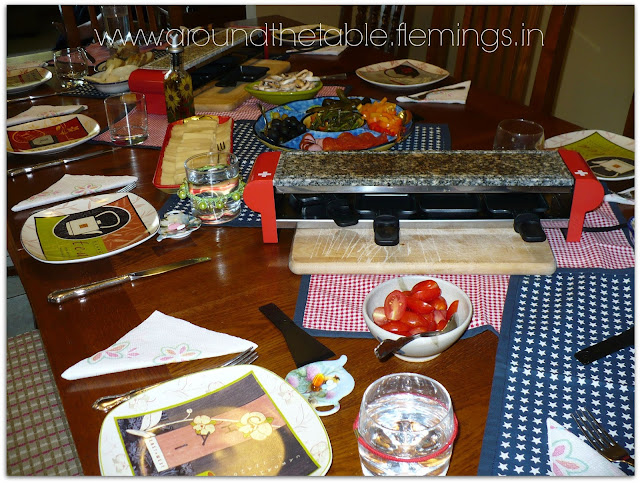 Here's an idea of what food is needed to get you started:

To cook with:
oil (we prefer olive) 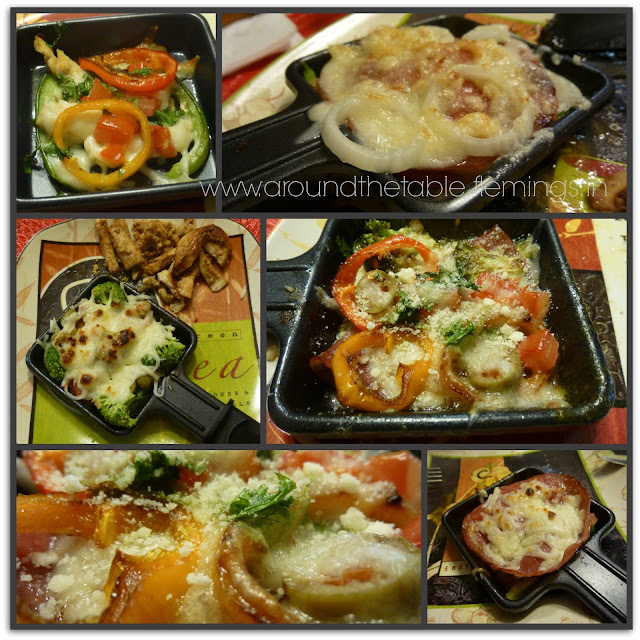 Condiments: (but not limited to these!)
mustard (all kinds)
salsa
salt
pepper
paprika
oregano
basil (fresh or dried)
chili powder
any spice or herb you think sounds good
ketchup (if you must!)
bbq sauce
steak sauce
sour cream (for topping cooked tidbits)

And most importantly:
Cheese!
(You can buy a rather expensive "Raclette" cheese, but we have found that any kind of cheese that melts is good. We like swiss and muenster especially. I've heard of people using camembert, brie, and feta.  You can use sliced cheese or shredded.)


Honestly, this is the greatest way to use up veggies, bits of meat that you don't know what to do with, jars of condiments you bought for some forgotten recipe, and almost anything you can think of.

Here's what you do:


I hope you get excited about raclette, and look into buying a raclette maker to make your family meals and dinner parties that much more fun!

Update: A friend wrote to tell me they do this basic idea with an electric pancake griddle on the table. So if you don't want to invest in the raclette cooker, you can still have fun with this idea! 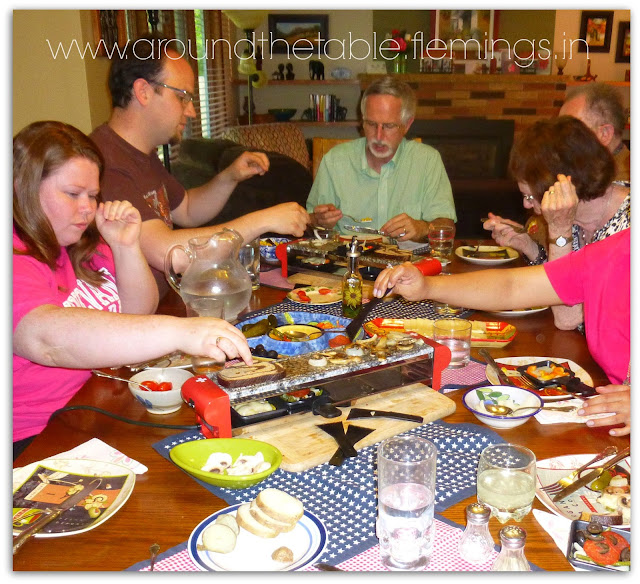 A Year of Bible Study

I did my education from kindergarten through my second year of college in public schools. (Altogether there were seven schools during those years...but that's another story.)

In high school I started to desire to go to a Christian school. My parents felt it would be best for me to stay in the public school and be a light there. Besides, there was the cost to consider.

As the end of high school approached I started talking about going to Bible School. My parents wisely took me through steps to discern God's will, including giving me their advice. Many of these talks took place around our dinner table. Together we decided that I should go to the local community college for two years first. 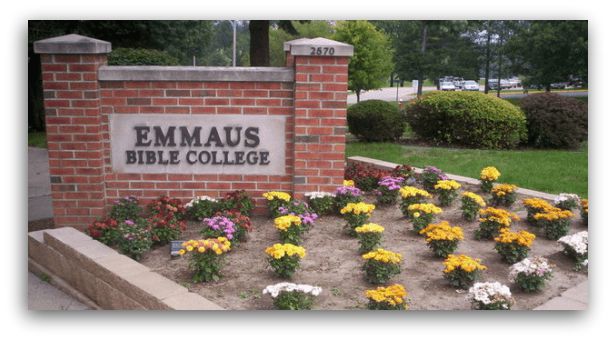 Finally the day came when I prayed with my parents at San Francisco airport and flew with a friend to Chicago to attend Emmaus Bible School. One of the best decisions of my life.

At the freshman reception I was introduced to the missions professor who had been a missionary in South Africa for 25 years and whose brother had been martyred along with Jim Elliot in Ecuador. I asked him if he had any other family that were missionaries and he said, "No, but I have a son..." (That's another whole story too, but yes, I did marry that son!)

That is not the only reason it was one of my best decisions. Even if God hadn't had a husband for me, it still would have been a great decision because after one year of Bible school I felt I knew how to study the Bible for the rest of my life. I certainly didn't have all the answers (and I still don't), but I felt prepared to search out those answers in the Word of God.

Today there are awful statistics about how many Christian young people will go off to college and leave the faith. I think that is the saddest thing that can happen. Worse than not finishing college, worse than working a dead end job all your life, worse than having to pinch every penny and (gasp!) worse than never owning a house, a new computer, or a nice car.

Attending Bible school is no guarantee they will keep the faith. I have former classmates who did not. Sadly, I have a child who has not (yet). But I think a year learning about the Bible and how to study it could be the most important year in anyone's life.

Emmaus is now a Bible College with several professional bachelor's degrees as well as Bible and ministry degrees, including a counseling degree that was named Number One in small colleges. But they still have the one year Bible certificate that I got there, too.

Even if Emmaus doesn't offer the career studies your son or daughter wants, a year studying the Bible will never be a wasted year.

To learn more about Emmaus Bible College go to www.emmaus.edu.


I am a proponent of the Bible and Bible colleges, especially Emmaus, but I received no remuneration or gifts for writing this post. 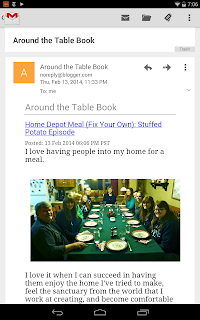 For More Ideas and Inspiration:
Check out the book Around the Table: Connecting With Your Family at Mealtimes. You can read the first chapter at this site and order a copy of the book.

Disclosure
Posted by Sharon at 5:30 AM No comments: