When we arrived we were weary. A three day conference held in Arabic with a translator sitting behind us...most of the day in a an old Hyundai with five adults...sightseeing around ruins that involved a couple hours of walking...a huge and delicious lunch of mansaf (a typical Jordanian meal of lamb, yogurt, and rice) at 4pm...watching a sandstorm move across the Jordan River valley at sunset...and the fact that it was after 10 pm all contributed. Now we were delivered to the home of a German woman we had only met for a few minutes the day before. At her house our group--a Dutch couple, our Jordanian friend cum tourist guide, and my husband and I -- found a Jordanian man, an Algerian man, and a German man as well as our hostess. 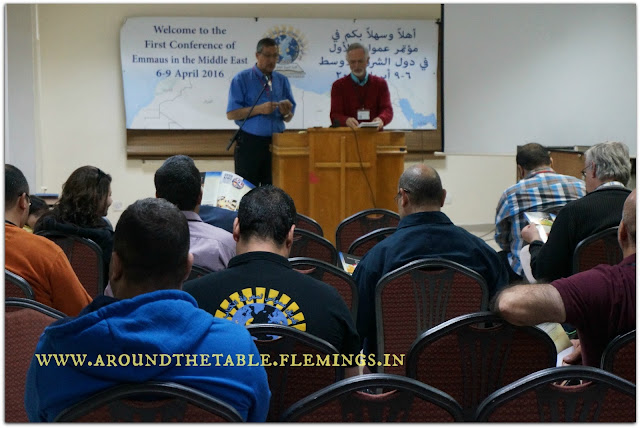 Our friend left to retrieve our luggage which had been delivered elsewhere and we were offered some ginger-lemon tea. Discussions were going on in four languages, but we were the only ones who always were speaking in our first language, because we don’t speak Arabic, German, or French!

Our friend arrived with our suitcases and plastic bags full of lamb filled pita bread, hummus, eggplant hummus, pickled cucumbers, carrots and turnips, yogurt, and more pita bread. We didn’t need to eat anything, but we did because it was all so good.

Our hostess showed us to our room where we found two large twin beds pushed next to each other. There was a pile of towels in the bathroom to choose from and a hot shower to get the ancient dust from the the fascinating, column lined Roman city of Jerash off our bodies.

The next morning our hostess had to be at a meeting at 7:30 am so we wandered out and found our own breakfast amid the clutter of pita breads, apples and oranges, hummus from the night before in the fridge, spicy olives, tasty cherry tomatoes, and large slices of cucumber and pepper. Not your average Kellog's breakfast, but one I enjoyed greatly.

We had friends from South America, who now lived here, arriving to pick us up for most of the day so we left after putting a load of laundry in the machine and hanging it on the rack on the balcony to dry in the dry Jordanian air.

That night we came back and attended meeting at the local church with new and old friends. It is amazing how other believers are instant friends, even when you can't hold a conversation with them. Once again we were invited out for a delicious supper of Middle Eastern food.

During the day our hostess had called the bus company for us and organized our trip to Petra, the city carved into red stone cliff faces 2000+ years ago. We had to be at the bus station at 6 and our Dutch friends had to be at the airport at 5 a.m. “No problem!” sang out our hostess, even though we got to bed just after midnight.

The next morning she was cheerful as she drove us to the bus station and made sure we had everything we needed including her extra cellphone so we could call her when we were on our way home. 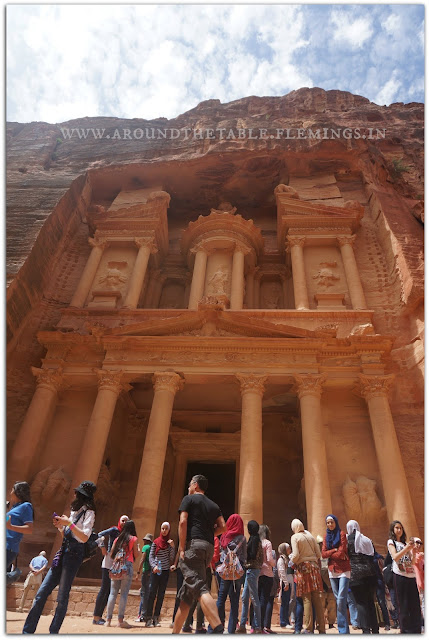 Four hours in the bus through the desert made us grateful for air-conditioning and a bathroom break. We would not have made good Israelites wandering in the wilderness. We had 7 hours to wander through Petra, absolutely fascinating to see the city carved into the cliff faces. One of the places people should visit! Then four hours home. Our phone didn't have any minutes left on it and the bus was going to be 2 hours later than she thought. But when she called to find out she sang out, "No problem. I will call again when you are closer to make sure of the time."

She picked us up after 9 pm and took us home for a delicious fruit salad and tea. Our other friends called and asked if they could come to say goodbye, she made sure they understood we did not want to be up too late. They came and we had our last hugs, received Arabic sweets, and were told that a man from the local church would be taking us to the airport the next day because all of them had to be at work.. He didn't speak English, but knew what to do and they had already paid him.

I had heard about Middle Eastern hospitality, but now I had experienced it. I no longer wonder why Abraham insisted the angels wait while he killed a calf and roasted it. Time, generosity, and their own convenience are not what is important to them.

Watch here next week as we see some changes to this space. I hope that I will be able to continue to encourage you in following Christ, in your home, around your table, among your family, and with your life.