15 Things I Did Right for the Holidays Last Year

Last year we had a wonderful Christmas. I had ten days of all my kids and grandkids in town. Bliss! But there were six kids under six, three of them were under one, and anywhere from five to twenty-one people at a meal. So here's what I did right that made it a wonderful time. (I will spare you all I did wrong!) 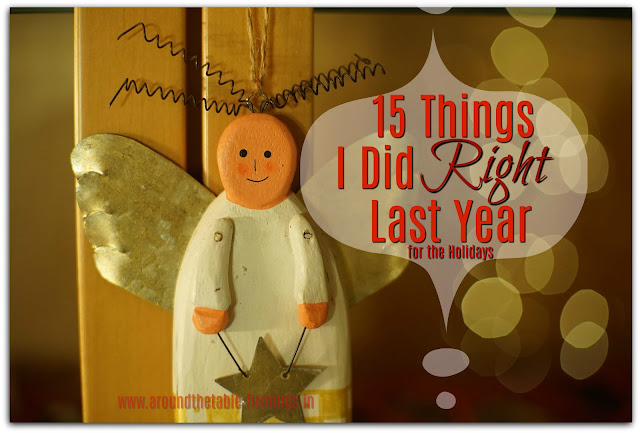 Overshop -- When I was in the store and I thought of something, like TP, I bought extra. Butter was on sale for 60c less than normal a pound and since the store was around the corner I eventually got 10 pounds of butter, even though there was a 2 pound limit per checkout.

Easy Entertaining -- I learned from a friend who is 25 years younger than me: To have an easy party have everyone bring a plate or two of appetizers. We had one get together like this and everyone had food they liked and no one had to work too hard, especially not me.

Delegate (verb) -- Get everyone to help. They may look like they are busy on their computer or phone, but if you ask nicely they will set the table, unload the dishwasher, or make a salad. It might not be done exactly the way you would do it, but, hey! If the dishes get into the dishwasher dirty and then into the cupboard clean because someone else did it, I can spend a few more precious minutes with my grandchildren!

Menus, menus, menus -- making menus for 3 meals a day for 10 days for anywhere from  9 - 21 people and making a comprehensive grocery list is a job of about 2 hours for me, but it is two hours well spent. I checked every recipe, the fridge, freezer, and pantry and bought everything I could in one enormous, expensive shopping trip. But everyday I could just look at my list and know what I was going to make and that I had everything to make it.

Lists, lists, lists -- I also noted what fresh things might need to be bought for each day and could send someone to the store early in the day while everyone was still organizing themselves. Two caveats: this did not mean that everything went according to plan--some days got rearranged, but it's easier to rearrange than come up with an idea, and this did definitely not mean I remembered everything.
There were also lists of favorite foods, special activities, times of events, photos I wanted--basically everything so my brain had a holiday, too.

Cook ahead -- two pans of enchiladas made ahead of time and in the freezer, meant dinner for one day only needed to be defrosted and heated. That means I could spend the afternoon out doing something even more fun than cooking.

Change the venue -- I like having the holidays at my house, but just having arrived back from a ministry trip India we asked my mom if she could host Thanksgiving Dinner and we would do most of the work. Then we did Christmas at our house.

Include everyone -- we invited the whole family. Some in-town, extended family, had their own plans or couldn't come to the activities we invited them to, but they knew they were loved and wanted.

Don't include everyone -- Our in town family has an age range of 0-91. Sometimes the oldest generation just prefers a quiet evening at home rather than the controlled chaos of a houseful. It's actually a gift to them to not invite them to everything. We chose the main events and ones that would be a bit calmer to include them in. Some activities were grown ups only. Some were kid centered.

Cherish the people -- I spent a day cleaning before everyone came, but after that I didn't fuss, just worked a little at keeping the clutter under control, after all this was the year we had three new grandbabies and there was lots of baby paraphernalia around the house. But next year they wouldn't be babies, so lets cuddle them this year!

Take time out -- the "girls" all went out for coffee one day, an hour and a half of blissful conversation. The coffee shop had conversation questions on the table--and you know I love conversation questions! Those got us started, but we had plenty to talk about on our own. And we enjoyed it so much that we encouraged the guys to go out another day. They took a board game with them and had a fun time together.

Be Progressive -- as in a moving dinner; I grew up living at least 1000 miles from my grandparents and only for four years did I ever live within an hour of any aunts, uncles and cousins. When we got married we moved to South America for 24 years, so this is the first time to have so many family homes in one town since our son married five years ago and lives in town and my parents moved here two years ago. So we did a progressive dinner. The plan was a salad at one home, main course at another, and dessert at a third. But one family got sick so we pared it down to two homes, and given the age of some and the cold weather, that was probably enough.
Activities -- Ask people what they want to do. I'm an idea person, but not everyone likes my ideas and I don't have to move four littles to get it done, so we asked, got some feedback and proceeded to make plans, plans that got changed, rearranged, and cancelled, but that's why we had to ...

Be flexible -- I am not a "go-with-the-flow" kind of person; it's just not the way I'm wired. (See "lists" above.) But when Christmas guests include six children five and under, three of whom don't have a year under their diapers yet, and all their parents, things are not going to go according to anyone's plans! So we don't sweat it. 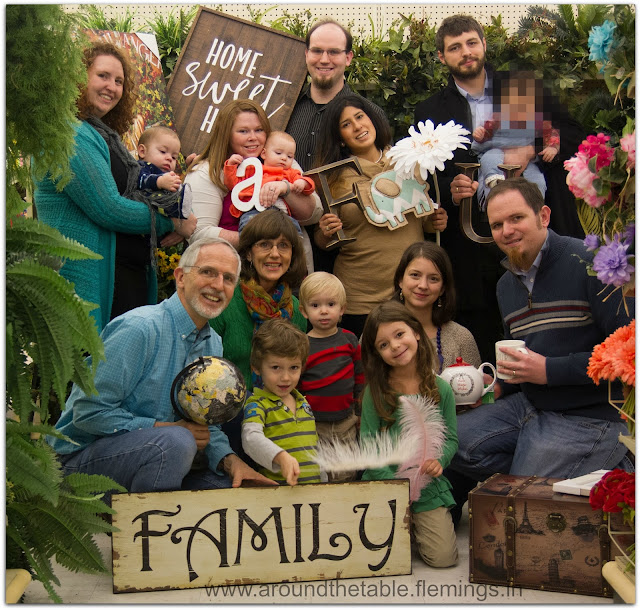 Enjoy! -- I am never happier than when I have my whole family around. Sometimes I just stood back and watched them all interacting, picking up each other's babies, playing games, and I thanked God.

For more unique ideas to prepare for the holidays, click here for a Thanksgiving Challenge and here for a real life illustration of how much we have.

Do me a favor and please *like* the posts you see, comment on them, and share the ones you think are worth sharing to help more people see it and to help you see them all as well. Thanks!