I Am Simeon -- A First Person Christmas Story

The place: Jerusalem.
The time: during the rule of Caesar Augustus.

And I know what your Bible says about me. The first phrase is quite accurate: There was a man in Jerusalem whose name was Simeon. That’s me, the man named Simeon. 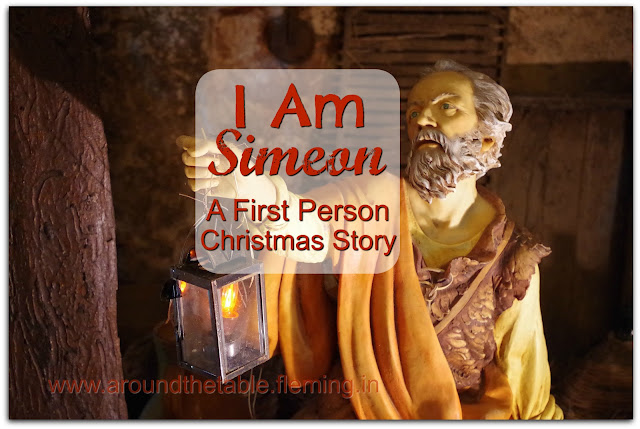 Your Bible also says that I was “looking for the consolation of Israel.”  What's that mean? The world was so dark with sinful, despotic, self-seeking, godless people (it’s nothing new to your time) that I knew we desperately needed the Messiah to come and save us. He would be our comforter, our consolation, our salvation.

Doctor Luke also wrote that I was “righteous and devout.” Well, I know I sought to live rightly toward my fellow man and to give God His proper place in my life. Although that was always my goal, I didn’t know if I succeeded.

There was one thing special about me that I was, and am grateful for: God deigned to place His Holy Spirit upon me. Back then, God chose who He would give His Spirit to. Because of Him, I knew that during my life I would see the Messiah. In His way of speaking to a person inside their minds—I still can’t explain it—the Holy Spirit had revealed this to me.

And so it was that one day I felt prompted to go to the temple. It wasn’t just the thought I should go to the temple sometime today, but an urgent need to go right away. Of course, I used to go often, but this time it seemed very important. I know now that the Holy Spirit was leading, but at the time that was not obvious to me. I am so glad that I recognized the urgency and obeyed. 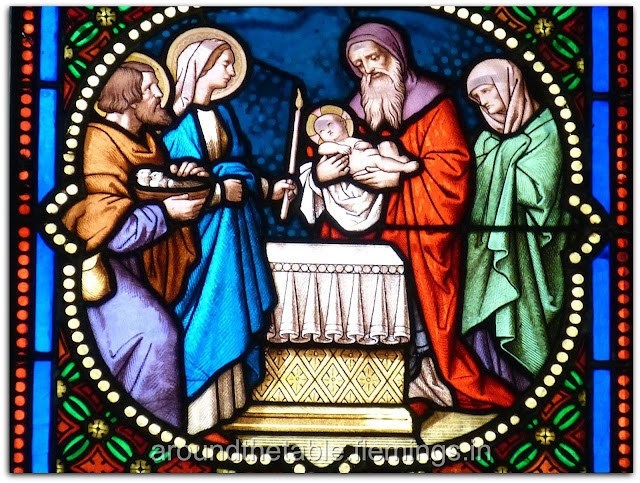 While I was there, I saw a poor young couple come in with their firstborn son to present Him to God. I knew they were poor not only by their dress but by the offering they brought, two turtledoves. People with any money brought a lamb. I knew something else about them, too. How did I know? Again, I can’t explain it, but in my heart and mind God let me know that this baby was His Salvation. The Messiah I had been waiting to see!

I walked up to them. Then. I. Took. Him. In. My. Arms. I held God in my sinful, human arms! I spoke to God, “It is enough. I can die at any time in peace because I have seen Your Salvation, just as You promised I would.”

At that moment, I knew I was filled with the Holy Spirit because I said things I could hardly believe. I knew they were not my own thoughts, but words God was giving me.  “Your Salvation is for the whole world. Gentiles will learn of Him and understand.” Yes! I said, “Gentiles.” Even though I had built in, cultural prejudices, I also knew the Bible talked about Israel being a blessing to all nations. Now I could see some of what God was doing. He was going to offer forgiveness of sins to non-Israelites as well as to us! And I didn’t stop there; I knew that the arrival of Messiah meant glory for Israel.

Mary and Joseph stood there amazed at what I said. Here was a stranger telling them about the significance of their Son, not only for Israel, but for the whole world! I’m pretty sure they were continually trying to grasp Who their Son was. The look on their faces compelled me to try to fortify them. But the Holy Spirit took over my words again as I spoke to Mary. “This Child,” I said, “Is going to cause division. Some will follow Him, but many will oppose Him, and your mother-heart will ache because of what your Son must endure.”

I had no idea my words would be remembered, much less recorded for centuries on earth and for all time in the Word of God. I knew that this baby was God With Us, Emmanuel, but I thought this was a personal revelation that God had, in His extraordinary mercy, given me to know. It was the fruit of hours of prayer, reading, study, and meditation.

The years that I waited on earth for the promised sight of Him seemed so long at the time, but from the perspective of eternity they were just a blip in time. I’m ashamed of how faithless I was so many times, how often I pled with God for a sign or a further promise, which in His graciousness He would give me through the Scriptures. I was faithless. He was faithful.

It was a privilege to know I would see God’s plan in person. It was a delight to hold the Christ in my arms. It was an honor to have my words recorded in the Bible for all time. But it is my eternal joy to be the recipient of that salvation that came through Christ’s death on the cross and to live  forever in Heaven with Him.

Those who wait for the Lord
will gain new strength;
They will mount up with wings like eagles,
They will run and not get tired,
They will walk and not become weary.
Isaiah 40:31

Do me a favor and please *like* the posts you see, comment on them, and share the ones you think are worth sharing to help more people see it and to help you see them all as well. Thanks!