Who Will Join the Fight?

"The big problem here is we don't have people who will do the ministry." We were riding in the car with Vladimir in his home country of Serbia on a trip to encourage people to study the Bible using the Emmaus International Bible Study Courses. We had crossed the Balkan mountains by bus from Albania through Montenegro and Bosnia Herzegovina to the northern plains of the former Yugoslavia.

But we could have been anywhere in the world. Everywhere we go we are told, "We. Need. Workers." Christians to take on ministries. 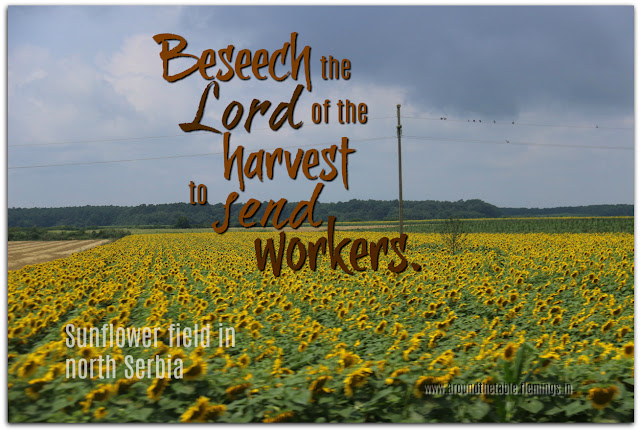 Vladimir told us that at one point his village of 6000 was 10% Christian. He was excited about that figure. And it was good, especially for a former communist country. But I thought about the 90% who are on their way to hell. Why can't we reach more?

Then this morning I read about David and Nabal. Granted, David wasn't exactly on a godly mission. But I was struck by how many went to the fight and how many "stayed by the baggage." Four hundred went out to defend their honor and only two hundred stayed behind. (1 Sam. 25:13) Later when David has to rescue the wives and children of his men from the Amalekites, the same ratio had to stay behind because they were exhausted, but the majority went to fight.

How many have joined the fight today? I know we can't all go to another country, but we can all work where we are in local ministries, with people we know, and in prayer.

There are so many needy places in the world that we can be praying for. And look what God does in answer to our prayers! We as a people prayed for years for the gospel to be able to get into the communist countries freely and 29 years ago that became a reality. We pray for the people of North Korea and we can see things happening there! As we pray for God to open up the Muslim world and reach these people with the gospel, imagine what He can do!

There are places close to home as well, in our schools, offices, neighborhoods, and local churches. Ministries need people! We can be one. And we can pray for many. The Lord's prayer request is still relevant today.


The harvest is plentiful, but the workers are few. Therefore beseech the Lord of the harvest to send out workers into His Harvest. Matthew 9:37-38

The danger in praying that prayer is you might discover that you are the answer.

*  *  *  *  *
To never miss an Around the Table blog post, simply sign up in the space near the top right side of the blog, below the picture of the book: