Last spring my older daughter and I were walking around an old village near where she lives in Germany. The amazing thing to me about the some of the buildings was their age--almost 1000 years old. I wished the walls could talk! I wonder what stories they would tell, what events they had witnessed, what changes had occurred during their time. Some of my ancestors came from Germany; I wondered if any had seen these same walls?

Last month my husband and I celebrated our anniversary in a tavern where some of George Washington's men stayed. What plans had been discussed? What fears did those men feel? What did those walls observe? 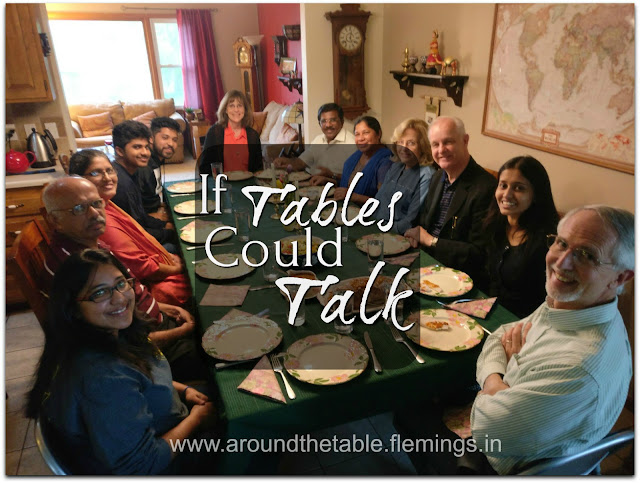 Last week my son and his wife were house hunting. A couple of the houses were a hundred years old. Who had built the house? What dreams did they have? Who had been born or died between those walls? What family events did those houses view?

Recently we completed ten years in our house. That's the second longest I've lived in one house. The table we gather around here is the one we've had for the longest time in our marriage. If our table could talk what would it tell you? It could talk about tense family discussions, arguments, and complaints, like any family. But it could also tell you about the time I started laughing so hard my oldest son asked, "Who are you and what did you do with my mother?"

It could tell the exciting Thanksgiving when we each wrote what we were thankful for on a paper feather to add to our paper turkey on the wall and our daughter-in-law's said, "My baby"--our first grandchild was on the way!

It could tell of four generations singing hymns after a meal with voices not meant for public, but hearts full of rejoicing.

It could tell of spilled milk, children crying, mother's having to eat cold food because of caring for babies, and broken glasses. It could show you scratches and nicks from carelessness and children enjoying using it as a drum.

It could tell of story devotions, video devotions, and fervent prayer times for those we are concerned about.

It could tell of being decorated for birthdays, baby showers, Christmas, Easter, Thanksgiving, and national holidays from many countries.

It could tell of the people from around the world who have sat there and the languages spoken there.

It could tell of meals that were a great success...and those that were total flops.

It could tell of discussions of cars, computers, cameras, houses, potty training, politics, faith, philosophy, and hopes and dreams.

Our table could tell the story of our family for the last ten years.

In one sense our table is just pieces of wood nailed together, but for our family it is our gathering place, where we have gotten to know and love each other, we've learned, listened, fought, loved, complained, grown, laughed, cried, included others, and been family.


What stories would your table tell?

*  *  *  *  *
To never miss an Around the Table blog post, simply sign up in the space near the top right side of the blog, below the picture of the book:

Disclosure
Posted by Sharon at 6:36 AM