I woke up in the night to hear three gun shots fired off in measured succession. I told myself it was fireworks and probably something in this Asian, Muslim-dominated country was being celebrated. About a minute later there were three more. I wished I had the hearing I had twelve years ago before I started getting recurring ear infections. Was that a sound out on the street? Were there people coming down the narrow alley behind the church compound? The shots were fired again. There was definitely a noise outside and the normally docile German shepherd, who lived in the compound, raced toward the gate barking. And then everything was quiet. I convinced myself it wasn't gun shots so I could fall back to sleep. 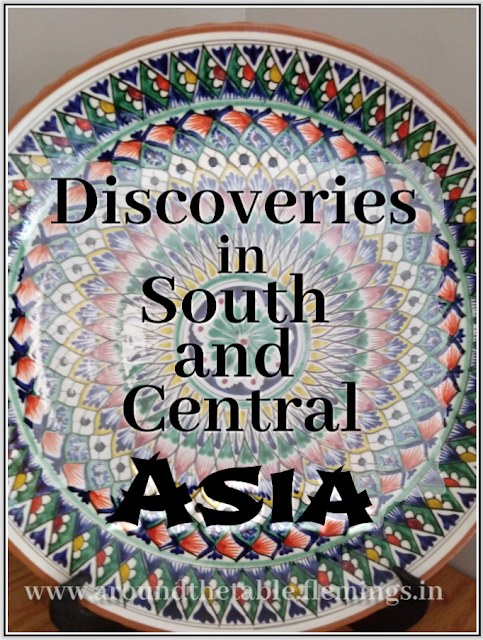 This is the result of an overactive imagination.

But having experienced whatever the sound was in the night, I still made the first discovery on our trip to four countries in South and Central Asia. In a country that has been in the news over the recent years, is it's not all like the news makes it sound. There are countries where life is awful and unbearable, but just because you hear a lot of bad news about a country doesn't mean the whole country is full of people who hate you and are just looking for a reason to cut your head off! In fact, the Christians we met in that country, in cities and in villages, said they don't fear for their safety. Not to say there aren't problems with the majority religion people in places. But there did seem to be less problem with pickpockets and other petty violence. Our host always left his car unlocked when we went in somewhere!

The second thing I discovered on our trip is that God is at work in these countries. He has people there who are eager to reach out and share the gospel. They do it carefully, but fearlessly. And they are seeing results. Foreign workers would most likely only be expelled from the country. But it's not easy to convert to Christianity. It could mean your family will disown you. Or a young woman might be forcibly married off to an unbeliever. And in some places your family could kill you and the "honor killing" would not be prosecuted by authorities. But God will build His church. Christ is building His church and the gates of hell will not prevail against it.

The third thing, is one I have known: No matter that you can't communicate with them, wherever you go, it is wonderful to be with God's people. Sitting on rugs on the floor of an adobe brick church out in a village with their unique rhythmic music accompanied by harmonium and dhol, you can't help but see the love of their Savior in their faces, even though the only word you recognize is "Aleluya". Having a queue of people come to you to shake your hand after the service and say any words they know in English because they are glad to meet a sister in Christ and being showered with flower petals on arrival at a church and given a garland to wear as a sign of honor for the Bible teacher and watching barely literate people pay rapt attention to the Word of God being expounded, all make you realize we are one in the Lord.

In spite of a thirty-six hour delay in arriving in our second destination due to a flight being cancelled because of the Coronavirus, which involved five hours on the Internet finding a way to go within our budget and twenty-four hours of travel beginning at 1 a.m. and going through two countries completely out of our way, we had a wonderful trip! I told my husband that I would go back anytime if we had a reason. And I don't say that about many places!

If you would like to guest post, please check out my guidelines and then get in touch with me. I'd love to feature you!

Do you like this blog? Would you please consider sharing it with a friend (or friends!) who you think it would be an encouragement to as well? To never miss a post, *like* the Around the Table Blog Facebook page. Then share it on FB!